Cultural traditions --- They are fascinating and provide such wonderful insights into history and how customs have evolved.

There are so many cultural traditions involved with organising a wedding and some of them we follow because they suggest 'good luck' while others just seem to have become part of a standard wedding plan.

So, as it's prime wedding season at the moment, here's a treat to some of the more interesting wedding traditions and how they came to influence us still, so many years later.

The term 'Tying the Knot' came to symbolise marriage with the ancient Celts. They tied the hands of a couple together in the form of an 'endless knot' or better known as the 'eternity knot'. This involved tying the hands in a way that symbolised the binds that held them together, forever. Even today, in many cultures around the world - including Celtic, Hindu and Egyptian -  the bride and groom's hands are literally tied together to symbolise their commitment and their bond to each other. This tradition is also linked to hand-fasting, where today, couples use different coloured cords or ribbons to symbolise their commitment.

Today, hand-fasting is growing in popularity as a way to symbolise the bond and commitment between couples, and it can be a very colourful way to add character and meaning to a ceremony, through the careful selection of coloured ribbons or cords, and sometimes adding charms that hold special significance. 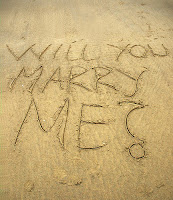 Proposing and Asking for the
Bride's Hand in Marriage originated with
the Romans who called this tradition 'the
joining of hands'.

During this ancient time in history, the groom
gave a coin to the bride's father to establish his
purchase of the bride. The father then handed
over his daughter to her future husband.  It was
during medieval times when a knight would
pledge his love on his knee as a sign of service to his lady.
Something  old, something new,something borrowed,
something blue, and a silver sixpence in her shoe is a tradition
rooted in that old familiar Victorian rhyme. 'Something old'
suggests the bride's connection to her family and to the past that
she brings to the marriage; 'something new' is hopeful of her good
fortune as a wife; 'something borrowed' represents the bride's
closeness to her family and friends who, it is hoped, will support
her in times of trouble; 'something blue' is a way of highlighting
her purity; and 'a silver sixpence in her shoe' points to the wishes
offered for happiness and the hope that the couple will avoid
financial hardship.

The Bride's Veil has a variety of
histories. One belief suggests it was an
ancient Roman custom of using a veil to
confuse evil spirits and keep them away
from the bride. Less honourable tales
suggest that a veil was used to keep the
groom from refusing to marry a woman he
found to be unattractive. And another suggests that during the age
where war and bride kidnapping were abundant, putting a sack
over the bride's head was a tactic to whisk  her away from the
groom.

We have certainly come a long way in modifying the tradition of a
veil in the more modern, beautiful headdresses that some bride's
choose. The kidnapping theory is also linked to the groom carrying
his wife into their new home, while other custom suggests that it
would be bad luck if the bride tripped and fell upon entering her
new abode, especially as they believed that evil spirits lurked along
the bottom of rooms. Today, bridal  veils aren't always used,
though they are still rooted in tradition. 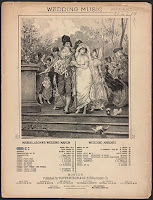 The Wedding March is a traditional piece
of music that was created by the composer,
Felix Mendelssohn, and this music was used
in William Shakespeare’s play A Midsummer
Night’s Dream. It wasn't just intended as a
piece of fantasy, but of royalty as well. The
Wedding March was selected by Princess
Victoria, daughter of Queen Victoria of
England, when she wed Prince Frederick William of Prussia, and
thus the tradition became more and more popular over time.

Wedding Rings and wearing them on the left
hand is believed to originate from different customs; the ancient
Roman's believed that there is a special vein that run from the ring
finger on the left hand directly to the heart, and they coined the
phrase 'vein of love'. The second custom seems to come from
Medieval Europe where it was common practice for the priest to
touch the first three fingers of the bride's left hand to symbolise the
Holy Trinity. The never-ending circle shape of the ring symbolises
the eternal love between the bride and groom, which were
presented to wives-to-be during the time of the Ancient Egyptians
as ringlets made of hemp.

Growing in popularity is the 'Warming of the Rings' at the start of a
Wedding Ceremony. Rings are tied to a cushion or placed in a
special pouch and passed from guest to guest throughout the
ceremony. Guests are asked to hold the rings for a few moments
and put their heartfelt thoughts, hopes, prayers, blessings etc. into
the rings for the couple. This is a really lovely way to involve
guests in the 'ring exchange' portion of a ceremony.

The Best Man is literally translated into 'the
best man to protect the bride'. Once upon a time,
grooms-to-be approached the most capable man
they knew to ward off potential unhappy
ex-suitors of the bride, as well as to protect the
groom in those moments when things might get
a bit nasty.

In more modern times, the best man's primary concern
is keeping the wedding rings safe and presenting them during the
ceremony. 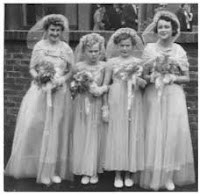 The Bridesmaids had a role, once
upon a time, quite different to day's
custom. In the time when brawling for
the bride was the thing to do, kidnapping
her was not uncommon (thus the need
for a glorified bodyguard in the Best
Man). While matching bridesmaids
dresses have become less common in
today's weddings, in Roman times when this was a sign of good
luck because people believed that those evil spirits would attend
the wedding in an attempt to curse the bride and groom.
Bridesmaids were required to dress exactly like the bride in
order to confuse the spirits and bring luck to the marriage.

I remember realising this when I saw my grandmother's wedding
photo from the early 1920's - she and her bridesmaid wore the
same dress and for someone unfamiliar with the bride and
groom, it was hard to distinguish who was the bride and who
was the bridesmaid!

The Kiss! The kiss was, at one time, considered a legally
binding act that fulfilled the contract between the bride and
groom. It was thought that through the kiss, the couple
'exchanged souls' with each other.

The Bouquet, and tossing custom
seems to gain its roots from ancient times when
wedding ceremonies were believed to be evil
spirit magnets. In ancient Greek and Roman
traditions, brides wore flowers in their hair to
discourage the evil spirits (unexpected guests)
from settling on the bride. As far back as the
14th century, securing a piece of the bridal
gown was intended to bring good luck. Of course, bride's didn't
take well to guests cutting pieces of fabric from their wedding
dress, so, as an alternative, bride's began to give away personal
items, such as the wedding bouquet. Contents of bouquets are
equally rooted in rich cultural and historical traditions. Some
cultures sew small pockets of herbs into wedding clothing, or
drape flower garlands over the couple's shoulder's for good
fortune. In other beliefs, herbs are added to welcome ancestors
and spirits. The Victorians were fascinated by the meanings of
different flowers and what they represent in the lives of the
wedding couple. And in Tudor England brides carried
marigolds dipped in rosewater, and ate them afterwards as they
were thought to be an aphrodisiac! In the Middle East the bitter
herb 'artemisia' is added into bridal bouquets to ensure that
marriages will survive bitterness as well as sweetness. Today's
brides often include their favourite flowers for their colour and
perfume. I have been privileged to see some absolutely exquisite
bouquets made from family heirloom jewellery.

The tradition of a Honeymoon continues today.
According to Babylonian tradition, the father-in-law gave the
groom mead to be consumed during the “honey month.”
Some beliefs suggest that this length of time also served as a
“cooling period” for the bride’s family, who might not have
been so eager to see their daughter leave home.


There are so many culturally-rich traditions in families around
the globe, so when you're planning your wedding, consider
where some of the traditions you'll incorporate into your
ceremony may have originated. Some are quite outdated by
today's standards, while others still hold some charm and
meaning.

The true beauty of creating a celebrant-led wedding ceremony is
that there are absolutely no limitations or restrictions on how
you design your wedding ceremony, what you want to be said
during your ceremony or how you symbolically mark such a
significant event in your life. Because a celebrant-led wedding
ceremony is not a legal event in the UK (legal procedures are
still organised by your local registry office), your imagination
and creativity are all you need to plan the perfect occasion!

With a Celebrant, you can create your own traditions allowing
for considerably more flexibility and freedom in how you wish
'your story' to be told!